FVS, through XL Farmcare Midlands Ltd, provides TB testing for the area extending from Nottingham in the north, to Northampton in the south, and from Coalville in the west to Wisbech in the east. In 2017, our busy TB team tested over 80,000 cattle!

When a herd’s TB test is due, you will be notified by APHA. It is your responsibility to arrange your TB test within the time limits given. However, we also receive the same information. So we will help ensure you do not miss the deadline, and be in contact to arrange a mutually convenient date.

The TB testing diary is co-ordinated by Vicky Fowler at our Melton branch (01664 567481), and the tests are carried out by one of our team of vets.

The days spent TB testing can be long, with multiple tests, so please help us by presenting all cattle in handling facilities which provide good restraint and safe access to the animal being tested.

For the purposes of TB surveillance, England has been split into three regions: the Low Risk Area, The Edge Area and the High Risk Area. Different rules on frequency of testing, and animal movements apply, as summarised below.

A new Radial TB Test has been established by APHA which means that herds within 3km of a holding which has a confirmed TB outbreak will have to undertake a test if the farm is in: Rutland, Leicestershire, Northamptonshire or Nottinghamshire.

Extended radial testing around lesion and/or culture positive TB breakdowns in all other parts of the new Edge Area i.e. Nottinghamshire, Leicestershire, Buckinghamshire, East Sussex and remaining parts of Derbyshire, Berkshire and Hampshire, will also be taking place. This will consist of an immediate herd test, followed by one more herd test after six months, before the herd goes back to its default annual testing frequency.

In addition, in the Low Risk Area (LRA), where testing is four-yearly, then any individual herds that are considered to be at a higher risk of infection (because of management practices or recent disease history) will still be placed on annual testing. This includes herds that fall within (or straddle) a 3km radius circle from a lesion and/or culture positive TB breakdown, or that are considered to be epidemiologically relevant to that breakdown. These herds will be subject to an immediate test of all the cattle on the premises aged six weeks or older. This will be followed by additional check tests at six and 12 months. If this enhanced surveillance fails to detect further evidence of infection in the vicinity of a lesion or culture positive TB breakdown, the herds will revert to background four-yearly testing.

In the LRA and Edge Area, ‘private’ Interferon Gamma Assay blood tests can be carried out in lesion and/or culture positive TB breakdowns. However, certain circumstances apply, and permission for these tests must always be sought in advance from APHA. Contact our TB Co-ordinator Vicky for more information, or ask your vet.

Regardless of area, forward and back tracer tests will still be required on animals from lesion/culture positive breakdown herds. When these tracers overlap with whole herd or other tests, please ensure the vets testing are aware so they can be submitted separately.

Herds in the Low Risk Area (LRA) of England

In the LRA, a TB surveillance test on the whole herd is currently required every four years.

However, if introducing animals from annual (or more frequent) surveillance testing areas of England and Wales, then private post-movement tests must be carried out between 60 and 120 days after the animals arrive into the LRA. (Some exemptions apply). These tests will be at the cattle keeper’s own expense.

Cattle keepers looking to sell a proportion of their herd, and subject to meeting a specific criteria, will be able to have a Defra-funded pre-sale TB check carried out on the whole of the herd. This will provide assurance for prospective buyers on the disease status of the cattle, and mitigate the risk of cattle with undetected infection moving to new herds.

Herds in the Edge Area of England

Counties falling into the Edge Area of England have now been placed on annual (or more frequent) testing.

Herds in the High Risk Area (HRA) of England

Herds affected by a new TB breakdown will need to complete a minimum of two short interval tests using ‘severe’ interpretation before restrictions are lifted. This will happen irrespective of whether cattle with typical TB lesions or positive culture results have been identified. This will increase the chances of detecting all infected animals in those herds, helping reduce recurrent infections and protect other herds from the risk of lifting restrictions too early.

From November 2017, all IRs (Inconclusive Reactors) in the HRA and Edge Area (and in TB breakdown herds in the LRA) that have a negative result on re-testing will be restricted for the rest of their life to the holding in which they were found. In other words, they cannot be sold to anyone else, and can only go direct to slaughter. The proviso is that if you do want to sell an IR animal it has to have a private gamma interferon test at the owner’s expense. If this is positive, the herd is deemed to be a reactor herd and placed under restriction until such time as it achieves two clear 60 day tests when restrictions will be lifted.

If you have any queries, please contact our TB co-ordinator Vicky at the Melton branch. 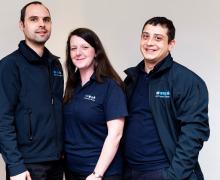